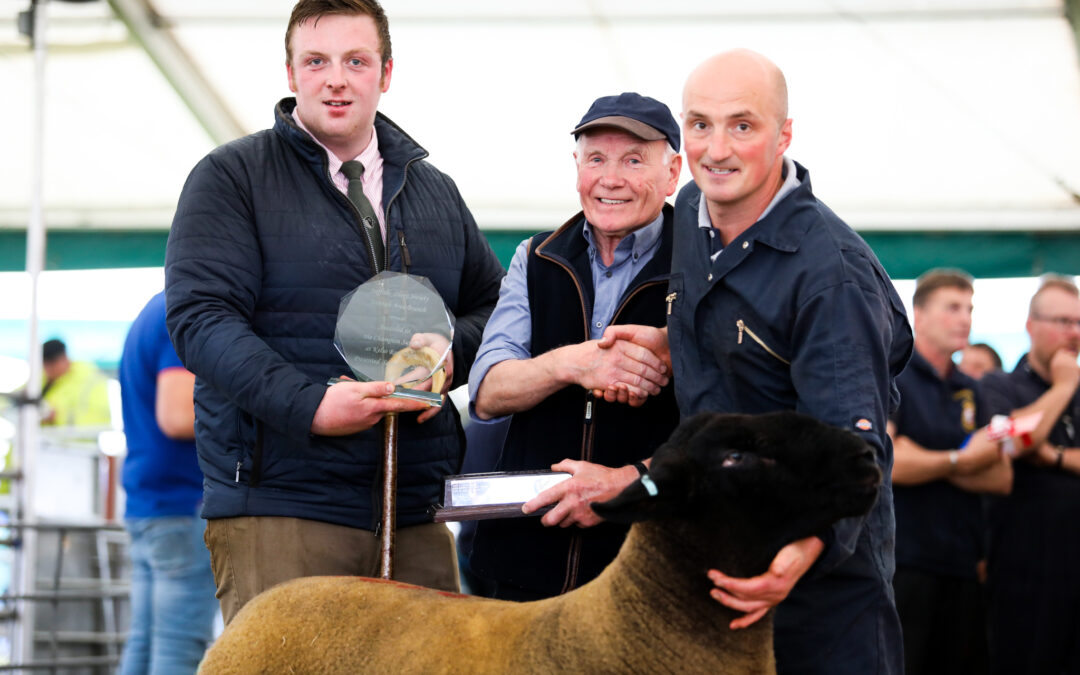 A return to a semblance of normality came to Kelso Ram sales in 2022 with the return of a covered sale, and it was a good job too as “monsoon” type rainfall was experienced on several occasions over the two-days of the sale.

Suffolk sheep were well represented with three rings covering the entries ring 8 for shearling rams, sold by Harrison and Hetherington, ring 10 for Ram lambs sold by United Auctions for all Society registered entries. A large show of unregistered Suffolk sheep went through ring 14

There was a big presence around the sheep pens before 8.00am and a buzz of anticipation and a feeling that the day may go well for sellers and buyers alike. The sale started promptly at 10 am and for those who have not been, two things, it’s worth a visit if you can as it is a sales experience not to be missed, and plenty of opportunity to meet up with sheep people from the length and breadth of the UK and Ireland.

Shearling Rams at Kelso had a good day with strong demand from the buyers, taking the joint top honours were lots 2211 from the flock of G. B. Ingram (Logie Durno) at £9000 purchased by Messrs Pate and Sons, topping the pen of 12, and leading the sale pen average of £2383.33.

Lot no 2350 reaching the same figure, £9000 leading the way for J. Watson & Co (Brijon) for their large consignment of 33 tups being presented for sale the lead price was taken home by Messrs Campbell, Glenrath. The Watsons sold well with their pen averaging £1289.39 on the day including a fourth highest price of £3500.00 for lot number 2355 finding a new home with Messrs Reed.

Lot no 2324 the champion at yesterday shows changing hands at £5000 from Messrs Alexander Gray & Son (Langside) and purchased by Ingrams.

Jalex Livestock took the next top price of the day with their lot number 2419 going to a new post code at the Barclay’s at £3800.00.

In total the Suffolk Shearling trade was up on last year with firm bidding throughout the sale seeing an average for 215 lambs sold reaching £1178.84 and increase of £179.73 on the year for 25 more shearlings finding new addresses.

Ram Lambs sold to a top price of £3600 for lot number 2912 consigned by R. H. Goldie,( Harpercroft) , Dundonald, Ayrshire being purchased by Bryden Nicholson, Garth Farm, Mossbank. Harpercroft going on from there to take the lead in pen average of £1837.50 a very respectable days business for Mrs Goldie!

Taking the next two highest prices were part of the pen consigned by SJ Buckley Sittinglow Farm, Dove Holes, Derbyshire (Sitlow)for lot no 2888 £3200 heading for EA &L Jacksons, Rudgley Farm,  Alnwick,  Northumberland and next up lot number 2883 at £2800 from the pen staying local to the sale being purchased by RG Laing, Oxmuir, Greenlaw. Along with the rest of the pen the average for all the consignment of 18 sold by Sitlow was a very respectable £928.88.

RH Black from Newton of Collessie realised £2000.00 for their lot number 2790 heading over the Irish sea and to the home of RAS Barkley, Blackbrae Farm Ballymena. Lot number 2761  sold at 1400 from S Lathangie, (Pyeston). A further group of ram lambs realising for figures ranging from £1100 to £1600 were from, Goldie, (Harpercroft), Christie, (Balquhain), Mackie, (Drimmie), who saw three of their pen realise £1200, and Irving (Glenreiver)

Ram Lambs sold were 165 in total yielding an average for the sale handled by United Auctions of £666.79 with that being an increase on the year of £67.72 for 19 more lambs sold on the day

448 unregistered Shearling rams went for an average of £908.42 a slight dip on the average price for the year of (£33.78) but 85 more sheep going to new farms which tells a great story!

It was a good day for Barrie Turner, new chief executive of the Suffolk Sheep Society on his first official day out of the office, too.

“Suffolk sheep breeders saw a great trade for their sheep, but then the breed has always been the No 1 for growth rates and ease of fleshing. Farmers realise these issues are more important now more than ever which is reflected in the increased numbers sold in all sections and the higher averages for registered sheep,” said Mr Turner who was most impressed by the quality and quantity of Suffolk rams sold.