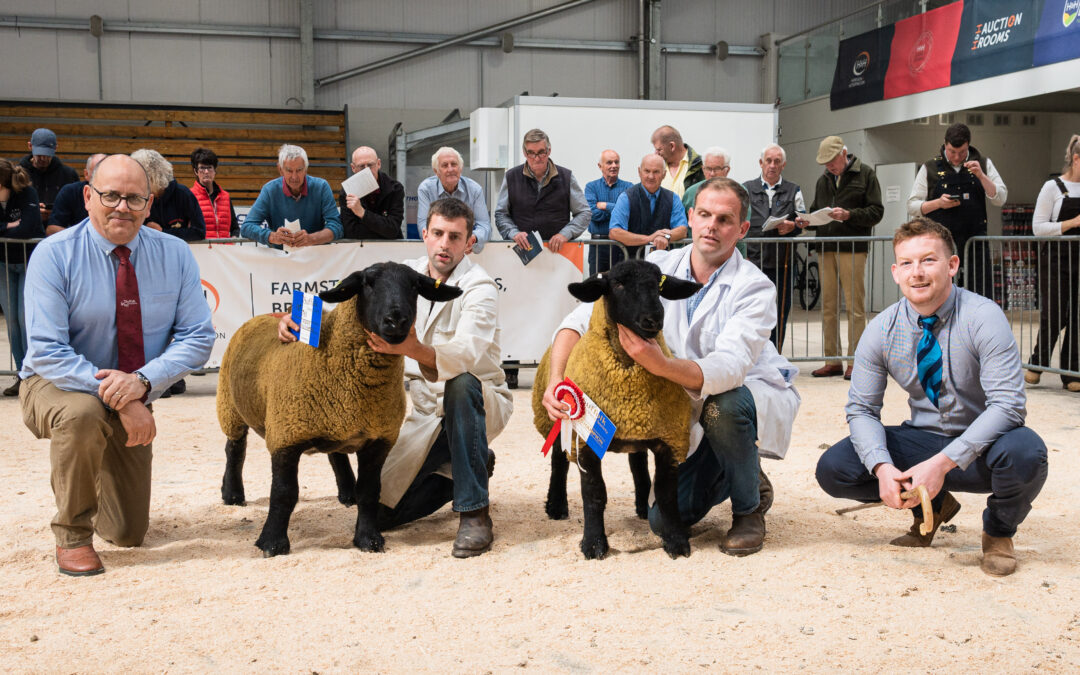 The annual show and sale of the North of England Branch Pedigree Suffolk breeding stock was held Carlisle  on Friday the 5th of August. The sale commenced at 11.30 am under the appointed Auctioneers Harrison and Hetherington at the Borderway Mart with almost 50% of sheep sold heading to commercial producers.

The top price at the Sale was 7,000gns for the Salopian Solid Gold sired Lot 398 ram lamb from TJ & CR Boden’s Cheshire based Sportsman flock. Out of a Strathbogie A Kind of Magic sired Sportsman dam, he was bought by Stuart Lathangie (Fife), Alastair Jackson (Dumfriesshire), James Wallace (Wigtownshire) and Mark Priestley (Northern Ireland).

Next on the money list was Sportsman’s other entry in the sale with the hammer falling at 5,000gns for Lot 399, a full brother of the top priced 7,000gns. This January born ram lamb is off to Ireland to breeder Sean O’Gorman from Co Dublin.

Myfyr Evans’ (Denbigshire) Show Champion was next at 3,200gns. Sired by the 90,000gns Ardlea Arbennig out of a Strathbogie Strativarious sired Lakeview dam, Pamela Lupton purchased this ram lamb for her Kexbeck flock based in North Yorkshire.

The top priced shearling ram was from Anthony Glaves pen 1,600gns bought by A & HC Smith from Hawick. Top priced female was Stephen Bolland’s (Wharfe Flock) gimmer bought by Keith Thomas from Staffordshire for 1,700gns. The top price Ewe Lamb was from Andrew Hambleton’s Dovetale flock pen and sold for 800gns to S Ryder from Cumbria.

The sale was a great success selling more sheep at a higher value and a better average than last year with ram lambs in particular performing well with an average increase of £140 on 2021. Once again, commercial farmers were out in force with almost 50% of all sheep sold going to supplying this key sector.