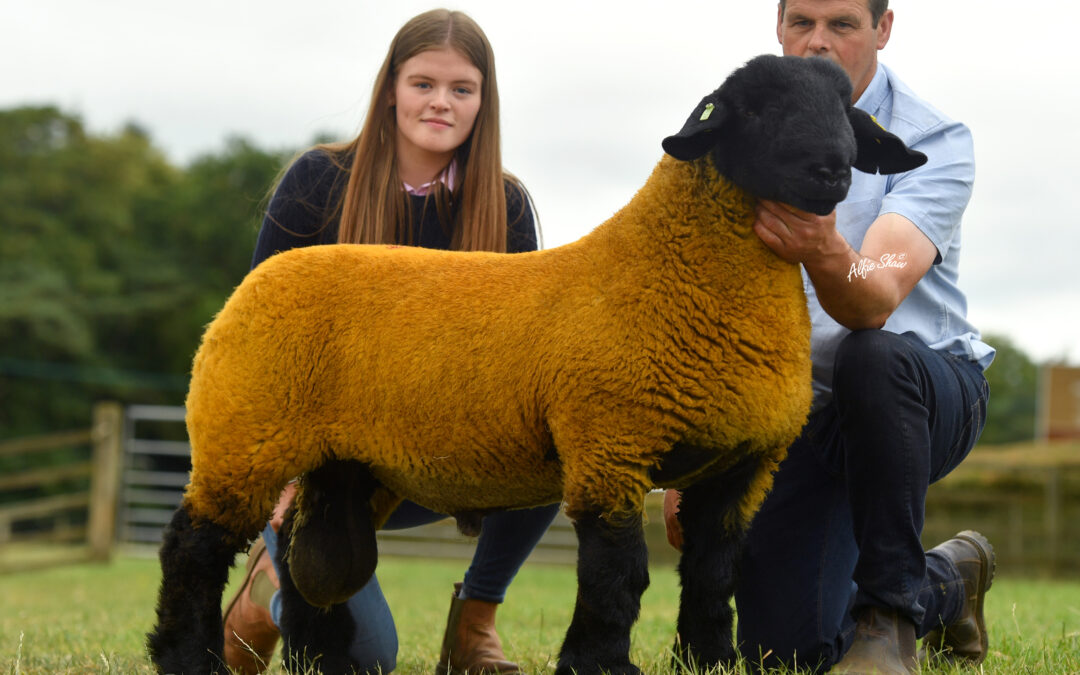 Lanark on Friday was once again the location for another successful Suffolk Sale. With 173 ram lambs sold, a 22% increase on 2021, at an average of £3,370 and an 82% clearance. Suffolk CEO, Robin McIlrath said “this has been an excellent sale and although the top prices quite rightly take the headlines with twelve 5 figure lots, it is also worth noting that 35% of ram lambs sold went to commercial buyers.”

Topping the sale at 75,000gns was John Gibb’s (Cairnton Flock) Bridgeview Belvenie sired lot 142 out of a Baileys Rock Solid sired ewe. This excellent tup was placed third in the Open Ram Lamb class by judge Paul Delves of Powys and was bought by Stephen Sufferin for his Northern Ireland based Crewelands flock. The dam is one of Cairnton’s top breeding ewes and is the Grand Dam of the 30,000gns Cairnton Strik.

Next on the money list was TJ & CR Boden’s (Sportsman Flock) Show Champion lot 151, with the hammer falling at 60,000gns and purchased by Phil Poole for his Shrewsbury based Salopian flock. Sired by the 2021 record breaking 200,000gns Salopian Solid Gold out of a Birness Muzza sired Ballynacannon ewe, this was the first of a run of 5 Solid Gold sons all selling for five figures at an average of 25,800gns out of the Sportsman pen. Lot 155 out of a Stockton dam was purchased for 30,000gns by Jed Sharp for his Worcestershire based Hawshill flock. The hammer fell on lots 152 and 156, both full sisters of 155, for 15,000gns and 13,000gns respectively with lot 152 purchased by Steven Buckley for the Derbyshire based Sitlow flock, and 156 heading north to Aberdeenshire to George L Stuart’s renowned Birness Flock. Lot 153 is out of a Sportsman dam and was a joint purchase for 11,000gns, bought by Gray and Son of Lanark (Langside Flock) and Mr Peter Gray of Gibsons & Co (Scrogton Flock) of Ayrshire.

The third highest price on the day went to James C Innes’ (Strathbogie flock) lot 233 with the hammer falling to Fife’s S Craft (Limestone Flock)  at 40,000gns for this Stockton Sniper’s Son sired tup out of a Castleisle Knockout sired Strathbogie dam who has also bred lambs to 22,000gns and 15,000gns and has also bred gimmers to 10,000gns and ewe lambs to 3,000gns.

The pick of S Lathangie’s Pyeston pen were full brothers from lots 61 and 64 selling for 38,000gns and 32,000gns respectively. The Limestone Marksman sired lot 61 out of a Birness ewe was bought by The Barbour family for their Solwaybank flock based in Dumfreisshire. The Castleisle Capaldi sired dam was the first prize ewe and reserve female champion at the Royal Highland Show this year  and was purchased for 3,800gns from the Birness flock in 2020. Lot 64 was purchased by a syndicate comprising of Howgillfoot (Cumbria), Balquain (Aberdeenshire), Kings (Devon) and Cadgerford (Aberdeenshire) flocks.

The last five figure sale was from James Young’s Muirton Flock (lot 207) bought by J C Innes for his Aberdeenshire based Strathbogie Flock.

This was the second year with the female sale on Thursday evening. Trade was brisk with 16 Gimmers averaged £1,822 and 5 Ewe Lambs averaged £693. The top gimmer from D P & RA Delves  Bridgeview Flock was bought by Northern Ireland breeder M & C McNally for their Benedyglen Flock for 6,200gns and the top price Ewe Lamb was from J C Innes Strathbogie pen and was bought for 1,000gns by the Bowdler family  for their Tombridge Flock in Shropshire.