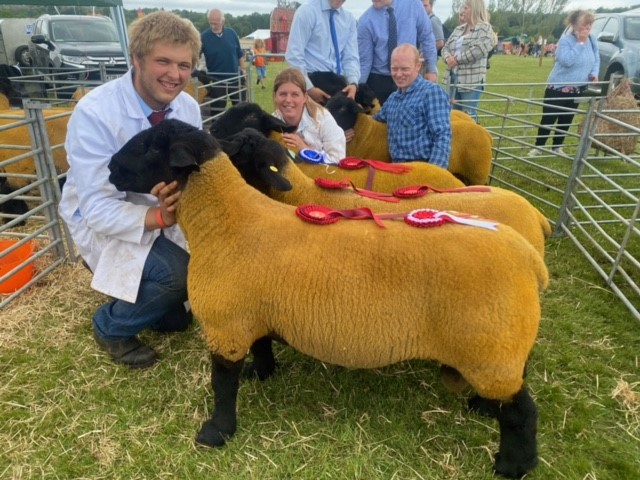 How did you get into breeding pedigree Suffolks?

When I was 7 years old I was given a cade Suffolk ewe lamb by a neighbouring farmer.  At the time I had a small flock of Ryelands.  Anna became a family favourite.  When she eventually died I decided I wanted some more Suffolks.  Now I have a flock of about 30 Suffolk ewes.

I have become slightly addicted to Suffolks even though they are not the easiest of sheep.  They are characterful, something a bit different and they have great commercial value.  I love their growth rates and the challenge of putting the genetics together to breed the best lambs you can.

When did you purchase your first flock?

What do you look for in a Suffolk tup?

If I could design a Suffolk tup it would have good length, tight skin, good colours and be spot on, on its legs.  I like something nice and showy with a bit of attitude.  I have always chosen looks over breeding.  My stock tups are Balquhain, Rookery and Frongoy and they each have different characteristics.  For the last 3 years I have used AI with fresh and frozen semen to match the genetics of the tups to the attributes of each individual ewe and I’ve been really pleased with the results.

What else is on the farm?

We only have 6 acres at home but I farm almost 200 acres in total.  As well as the Suffolks I have used 30 recipients this year, mostly Suffolk Border Leicester crosses.  I also run a flock of Cheviots and Scotch Half-breds and am using Suffolk tups on them to produce MV recipients.  Lastly, I have a Beltex tup to use on the late lambing Suffolks to produce cross-bred tups.  Until recently I also had some commercial sheep which I sold, to focus on the Suffolks and reduce lambing from five months to two six week blocks.  It’s all sheep on our holding.

Any successes to date?

I do lots of showing with the Suffolks in the summer and have won several interbreed championships.  I’m really proud to have won the Bury show interbreed championship 3 years running.  I get a real buzz from winning with home bred sheep.  Another success was selling the second highest price sheep at the 2020 Skipton sale with a Salopian Scuderia ewe lamb.

What has been your highlight so far?

My highlight so far has got to be winning the 2021 NSA Next Generation Shepherd of the Year competition.  At 19, I was the youngest finalist, and the competition was really tough, but the tasks were good fun and I’d encourage young shepherds to enter if they get chance as it’s a good way to learn, get noticed and to meet people.  The fact that I won as a first generation farmer who has had to build up my knowledge and flock from scratch made this award even more significant for me.

Where do you see yourself in 5 years time?

My aim over the next 5 years is to continue to improve the quality and uniformity of my Suffolk flock by buying in fresh genetics.  I’m hoping to be selling at some of the bigger sales by then and to have caught the eye of some of the top breeders.  Another aim is to become a role model for other young breeders, encouraging them to give Suffolk breeding a real go.

Who has been your greatest influence?

I haven’t just got lucky with my Suffolk flock; I’m working really hard and I am quite ambitious.  Over the past 5 years I have worked for Geoff and Gill Biddulph with their Pexhill flock.  They have been really generous, sharing their knowledge and encouraging me along my way.  I owe Geoff a huge debt of gratitude for pointing me in the right direction.  I haven’t always listened to his advice but, looking back on it, maybe I should have done!  He’s given me a great foundation to build upon.