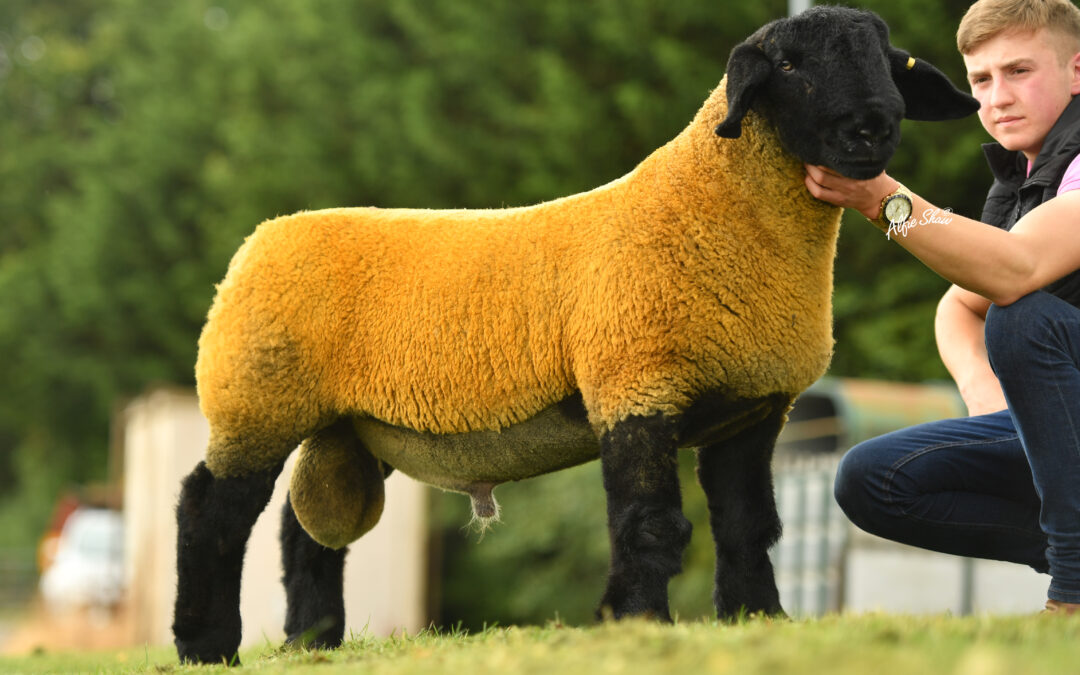 When the hammer fell at 16,000gns for Finn Christie’s (Maidenstone Flock) lot 162 it has marked a new generation of young Suffolk breeders beginning to make their mark. Young breeders also appearing in the top prices were Lilia Hutchinson (Howgillfoot Flock) from Cumbria getting 7,000gns for Lot 129 and Dafydd Jones’ Frongoy Flock Breed Champion (Lot 166) selling for 5,000gns.

The top price at the Norbrook sponsored Sufolk Sheep Society National Sale in Shrewsbury on Saturday 31st July was 16,000gns for the January born Crewelands Kingpin sired ram lamb from Finn Christie’s  Aberdeenshire based Maidenstone flock. Out of a Limestone Legacy sired Birness dam he was bought by Chris Holmes from Worcestershire (Rookery Flock) and Holly Bowdler from Shropshire (Tombridge Flock).

Next on the money list at 12,000gns was J C Innes’ Strathbogie Lot 145. This Forkins McCoy sired ram lamb out of a Strathbogie A Kind of Magic sired dam was bought by breeders, Dennis Taylor, Leslie Liggett and Ronan McLaughlin for their Ballynacannon, Carony and Ballyboe flocks. The Strathbogie pen had an excellent average at £3,914 for seven ram lambs presented and sold, all making four figures.

James Alexander bought Lilia Hutchinson’s lot 129 for 7,000gns for his Co Antrim based Jalex Flock. This ram lamb was sired by Howgillfoot Sniper out of a Lakeview dam.  G L Stuart’s (Birness Flock)  Forkin’s Firecracker sired Lot 150 was bought by Mrs M J Cornish for her Devon based Mardle Suffolks for 6,000gns. Another strong pen, Birness averaged £3,220 for six ram lambs presented and all sold, again all making 4 figures.

There were 5 lots getting 5,000gns including Breed Champion (lot 166) from Dafydd Jones’ Frongoy pen. This Strathbogie Rock On Tommy sired lamb was purchased by William Medforth for his Caernarfon based Penrhyn FLock. G & FJ Soulsby bought Northamptonshire based MJR & JA Pinny’s (Alloaks Flock) Redbrae Lynx sired lot 93 for their Williamsgill Flock in Cumbria. The Reserve Champion also went for 5,000gns. This Tom and Aimee Mogford (Mogford Flock) bred lamb was by Mullaghboy Goliath and will be heading to Scotland for G  L Stuart’s Birness Flock and Stewart Lathangie’s Pyeston Flock.

The best average for more than 3 ram lambs sold was achieved by first time entrant to the National Sale, Jed Sharp from Worcestershire with his Hawshill flock. His first two lambs through the ring (lots 201 & 202) both got 5,000gns, the first bought by Pamela Lupton for her Kexbeck Flock in Yorkshire and the second going to Stewart Craft’s Lakeview Flock in Fife. The hammer fell on lot 203 at 2,600gns. All three rams were by Frongoy Firenze out of a Hawshill dam.

Robin McIlrath, CEO of the Suffolk Sheep Society said “this has been a super sale with something for everyone and over 40% of the ram lambs going to commercial farmers. Its also great to see our younger breeders beginning to come to the fore. A big Congratulations to Finn Christie for topping the sale, and also to Dafydd for winning the Championship.” Robin went on to say “the Society has invested heavily in attracting and developing Suffolk Youth with reduced fees and our very successful Youth Championships. The future certainly looks very good for Suffolks!”