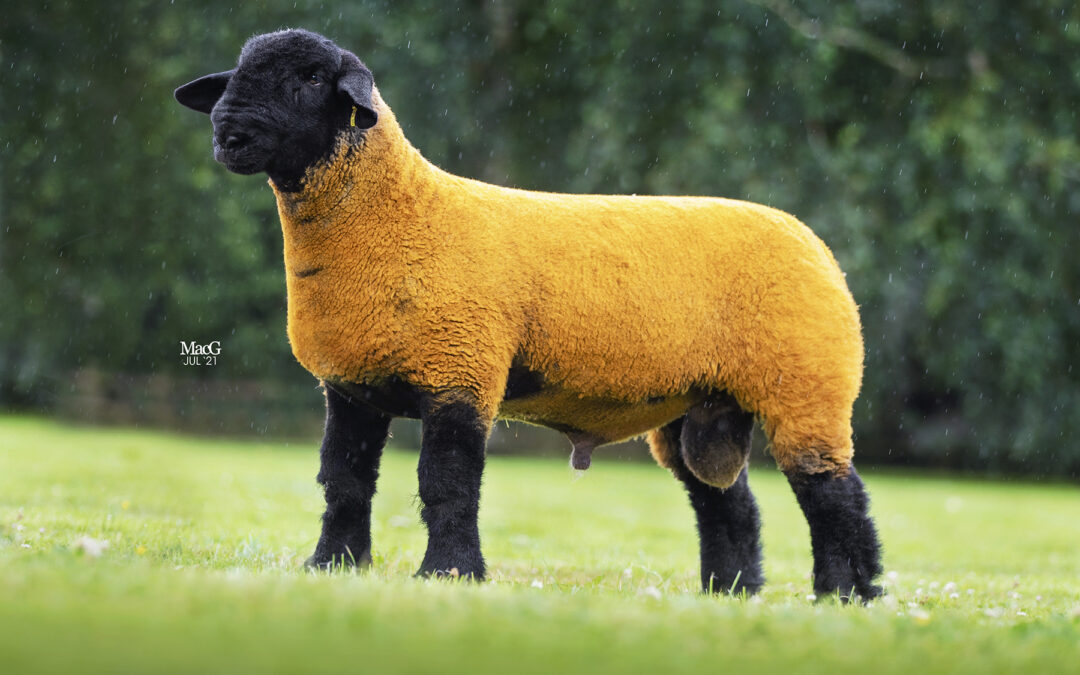 When the hammer fell at 200,000gns for Phil Poole’s (Salopian Flock) lot 129, the aptly named Salopian Solid Gold, at the Suffolk Sheep Society’s Scottish Area Sale on Friday 23rd July, it more than doubled the previous record of 90,000gns set in 2004. This lamb had already caught the eye of Championship Judge, Alastair Gault (Co Antrim) when it was placed as winner of the Novice Class and Reserve in the Open Ram Lamb Class.

Breeder Phil Poole said “I knew we had a good lamb and we were looking forward to the sale. Salopian has always invested in excellent bloodlines but we certainly didn’t expect to smash the Society record by 220 per cent!”

Mark Priestley’s Limestone Flock set the early pace at this electrifying sale with the first ram lamb of the day (Lot 27) selling at 48,000gns and was one of ten lots selling at five figures or above. This Forkins McCoy sired lamb out of a Limestone Aston Martin sired dam went to G L Stuart, Birness Flock (Aberdeenshire), S Lathangie, Pyeston Flock (Fife) R H Black, Collessie Flock (Fife), Claycrop Flock (Fife) and J I A Wallace (Wigtownshire). Another record for the sale, the highest price paid for a Northern Irish bred ram!

Two rams made 40,000gns, the first was from Stewart Craft’s Lakeview Flock (Lot 194). Out of a Rookery Rodeo sired ewe by Salopian Scuderia, this ram was jointly bought by Dennis Taylor (Co Londonderry) for his Ballynacannon Flock  and Iain and Judith Barbour for their Dumfriesshire based Solwaybank Flock. Also at 40,000gns was T J and C R Boden’s Sportsman’s ram sired by Strathbogie Ace out of a Stockton dam going to Mr Jed Sharp from Worcestershire for his Hawshill Flock.

Darragh McMenamin from Donegal, along with J G Douglas (Cairness Flock), with John Gibb retaining a share, paid 30,000gns for John Gibb’s lot 30. A Cairnton Prince sired ram lamb out of a Cairnton ewe. Next on the money list was Dafydd Jones’ (Frongoy Flock) lot 184 going for 25,000gns to Lilia Hutchinson’s Howgillfoot Cumbria based flock and James Alexander from Co Antrim (Jalex Flock).

Another first this year was the female sale on Thursday evening. Although entries were low, trade was brisk with 10 Gimmers averaged £2173.50 and 7 Ewe Lambs averaged £1350.00. The top gimmer from I & J Barbour’s Solwaybank Flock was bought by Northern Ireland Breeder Stephen Sufferin for his Crewelands Flock for 3,500gns and the Ewe Lamb was from James Scott’s Strathview pen and was bought for 3,000gns by T J & C R Boden for their Sportsman Flock in Cheshire.

Suffolk Sheep Society Chief Executive, Robin McIlrath said “There is a lot of uncertainty around with Brexit and its effect on the agri sector, so it was great to have an excellent day all round, obviously setting the breed record was the highlight, but with a 92% clearance rate (78% in 2020) and an outstanding average of £4,762 for 143 ram lambs sold, up from last years average of £2,993 for 161 ram lambs this has been an excellent sale. The female sale did really well and I’m sure we will see more entries next year based on the excellent prices on Thursday evening. Congratulations to everyone involved.”

3rd Lot 101 by The Hiddleston Family