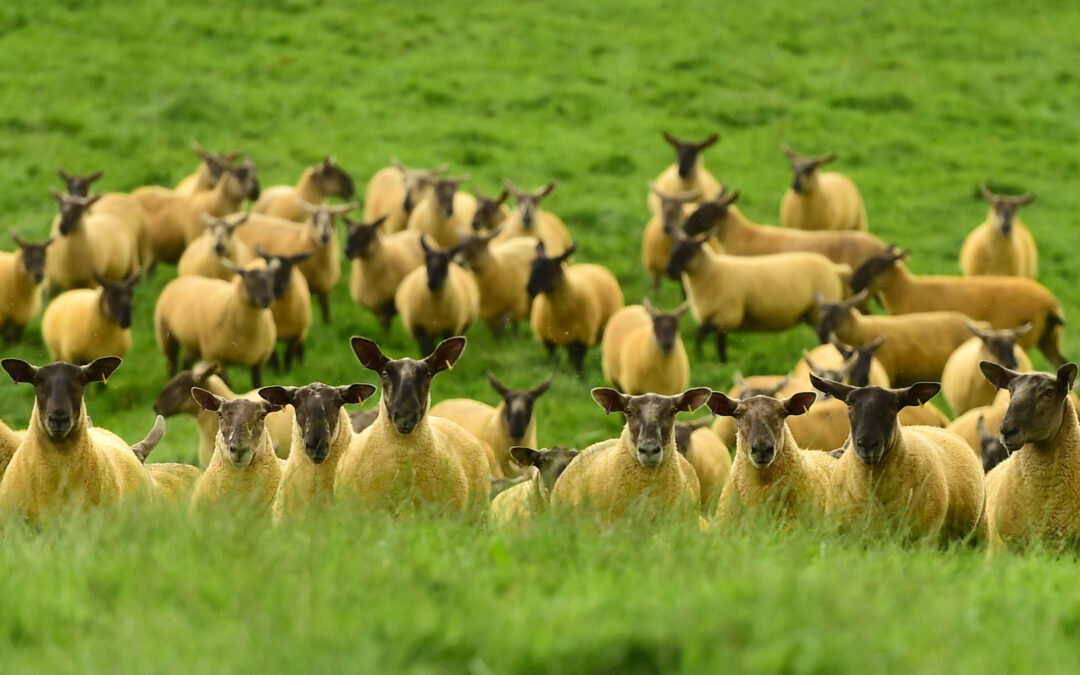 County Antrim businessmen and farmers, James and Nelson Alexander, have a clear focus on how they want their sheep enterprise to develop over the next few years, and since buying his first Cheviot mule ewes and using Suffolk tips from the start in 2014, they have developed a very successful enterprise.

With a commercial flock of 550 Cheviot mule ewes and 200 North Country Cheviot ewes along with 30 Pedigree Suffolk ewes (Jalex Flock), they also run just over 800 heifers which are sourced as maidens and sold in calf. With 1000 acres, all in grass including 250 conacre, he employs two full time men on the farm, Tony McCann and Liam Campbell.  He also has a dedicated shepherd, Martin Millar who joined the team in 2016. James said that ” Martin is a great addition to the team, we are now able to carry out more fine tuning around our lambing and feeding processes and all presentation work for the sales is done by him.”

Originally running a herd of commercial cows alongside the tractor and machinery sales operation, James decided that moving to a sheep enterprise would fit better with his other businesses and purchased his first Cheviot Mule ewes in the Autumn of 2014 when he sold his herd of commercial cows. A strong family man, James also wanted something that would be more family friendly for his 5 young children to become involved in and enjoy.

“We researched hard to think of what breed to introduce as we wanted to produce something more than a fat lamb. Our flock needed to be either self-replacing or produce a female suitable for replacements for other flocks. The Cheviot Mule was selected, I loved the look of the ewes, tight, bare skins, bright eyes and full of character. Being by the Blue Leicester they should be, and have proven themselves to be, both birthy and milky with the NC Cheviot giving some hardiness and character.”

He went on to say “the Suffolk was the only sire we considered for these ewes. The Suffolk x Cheviot ewes are very popular in Ireland and we believed that the Suffolk x Cheviot mule ewe would be a similar if not a smarter, birthier female. We researched pedigree Suffolks and we knew what we wanted, skins as tight as we could get them, black silky hair, medium bone, bright eyes and length and lift.”

The aim is to keep rams in singles when tipping to facilitate the monitoring of individual progeny. Shepherd Martin Millar said “the tips work hard. We put them to field with up to 110 ewes, with the tips usually switched on the 17th day of the cycle, if we feel a ram is performing particularly well we won’t switch and just watch with baited breath on the 1st days of cycle number 2. We understand that this system puts pressure on the ram, but we feed them well before going to the ewes and we will be semen testing them all from this year before turn out.”  James adds “We look for a very specific type of ram and are prepared to pay for them, so we need to ensure they are used to their full potential.  For example -one of our best breeding, longest established tips has successfully served 110 ewes 3 years in a row and got 90 last year and we expect him to easily handle the same this year.”

Teasers are used on all batches before tipping to keep the lambing as tight as possible. This saves labour and helps mitigate against fatigue setting in after the first three weeks. There is no meal fed to the ewes carrying twins or singles. Weather permitting, all twins are lambed outside on grass only and triplets and singles are housed at lambing with only triplet ewes being fed any concentrate. Singles are lambed inside to get the triplet lambs twinned on. Since 2018 a milk feeder has been in place for spare lambs with mixed results, this is being reviewed on an ongoing basis and they expect things to improve as it progresses. There were less than 30 ewes out of the lambing shed sucking only singles. Martin stated “we went to great lengths to get as few ewes as possible to field with only one lamb, of course there are always a few that become singles at all stages of rearing. No triplets were put to grass.”

Ewes are kept in their tipping batches right through the year and this means that at lambing the tips breeding can be followed. It is a good indication for the colours the tip is throwing and the vigour of his lambs when born. This is to avoid reusing any tips throwing less active lambs, To date only one tip has given unacceptable lambs. James puts this down to careful selection of rams. The singles and the triplet carrying ewes that go to the field sucking twins will be returned to their tipping batch. These will then be kept together until weaning at which stage the ewe lambs are tagged with different coloured tags relating to the tip that sired them, another method of ensuring careful monitoring of progeny of specific rams.

No creep is fed to any lambs, as they are being run through to gimmers and they are allowed to grow out on their own on grass. There is also no concentrate fed to the gimmers pre-sale either. The only ones that get any feed are 4 or 5 that are selected each year to show at a few local shows.

Ewes are weaned the first week in August with batches weaned from 189% up to 200%. Although initially considered a by-product of producing ewe lambs, wethers are increasingly becoming an integral part of the business and are as good as any fat lambs coming onto the market. Weighing wether lambs has been introduced this year with 125 lambs weighed. These were 50kgs+ live weight at weaning and were sold directly off grass for slaughter. All remaining wether lambs were shorn and put to fresh grass, most of which will be slaughter ready by mid-September. James targets a liveweight of 50kgs because he finds that this is the optimum liveweight for delivering the flesh required by his customers. All ewe lambs are also shorn and put to grass with most ewe lambs put to winter grazing October to January.

Over the last 2 years a small flock of pedigree Suffolks has been established with the aim to breed the characteristics needed to produce the sort of commercial breeding ewe lamb/gimmer that Jalex is aiming for. James says “the Suffolk tip has delivered all we expected, they perform well in servicing the ewes into the fourth year and we are getting good percentages with their lambs born with a high level of vigour.”