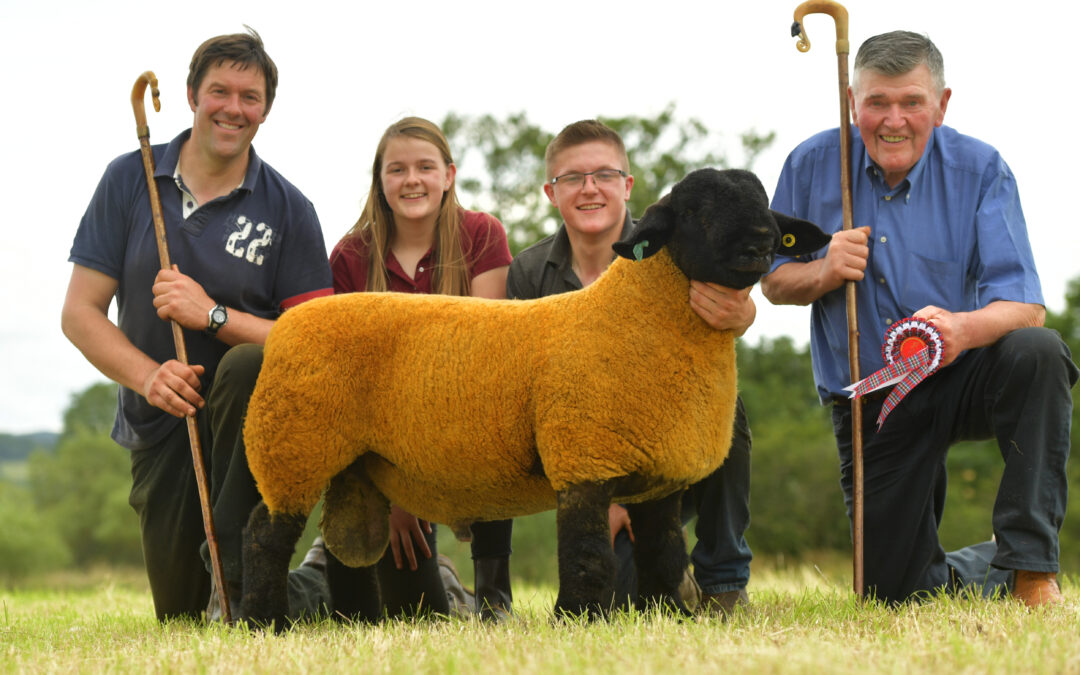 A top price of 43,000gns, one of eight lots selling at five-figures, set the scene at an electric Suffolk Society ram sale at Stirling, where George Stuart’s Birness flock led the trade with the top price. Click here to view pedigree

Donegal Breeder, Andrew Wilson (Castleisle Flock) had an excellent day in the sales ring selling 6 ram lambs to a top of 21,000gns with an average of 11,650gns.

“This has been an excellent sale this year despite the obvious challenges facing agriculture. I am particularly pleased that there isn’t just a single big headline price, but there was quality prices throughout the sale. This is the second year in a row that the sales average has recorded an increase with an average of £2,852, which is very encouraging for the breed. It has been a difficult year for our breeders and its great to see such a buoyant and positive sale on the back of some challenging months, not lease with all the uncertainty surrounding Brexit.”

The 43,000gns top price was a son of Ballynacannon Noah, out of a ewe by Cavanagrove Catalyst. He was knocked down to Dennis Taylor with Mark Priestley and Michael McNally (all N Ireland) taking a quarter share each.

Not satisfied with getting the top price, Birness flock averaged 7,667gns for their pen of 9 lots with Stephen Sufferin paying 10,000gns for the Limestone Legacy sired lot 147 out of a Birness ewe.

Next in the money list was Philip Poole’s Salopian Flock lot 155. This Solwaybank Rock Solid sired ram out of a Cloontagh Chieftain Sired Salopian dam was knocked down for 30,000gns to Paul Delves for addition to his Powys Bridgeview Flock.

Crewelands flock’s Male, and Overall Champion, (lot 124) was bought by Iain Barbour for 26,000gns from Dumfries for his Solwaybank flock. This Birness Playboy sired ram is out of an Ballynacannon Taylor Made sired ewe.

Mark Priestley (Limestone flock) got an average of 7,375gns for his 4 lambs with the 23,000gns lot 118 going to Seamus Browne for his Errigal Flock in Donegal. This Limestone Aston Martin Sired ram is of a Limestone Brigadier sired Gransha dam.

Donegal Breeder, Andrew Wilson (Castleisle Flock) had an excellent day in the sales ring selling 6 ram lambs to a top of 21,000gns with an average of 11,650gns. The hammer fell at 21,000gns for the Limestone Aston Martin lot 201 out of a Cairness Liam sired Castleisle dam going to Chris Holmes Rookery Flock in Worcestershire. Next in the price list for the Wilson pen was another Aston Martin sired lamb out of a Cairness See the Stars sired dam, lot 200, selling for 20,000gns to fellow irish breeder, Arthur O’Keeffe of the Annakisha Flock in Cork. Aberdeen flocks Birness and Strathbogie shared the 16,000gns price for another Aston Martin lamb, this time out of a Shannagh bred dam. The remaining three from the Wilson pen went for 5,500gns (Mr Delday, Orkney), 4,200gns (S Lathangie of Fife, Wallace & Co of Newton Stewart and R H Black of Fife) and for 3,200gns to Boden & Davies of Stockport.