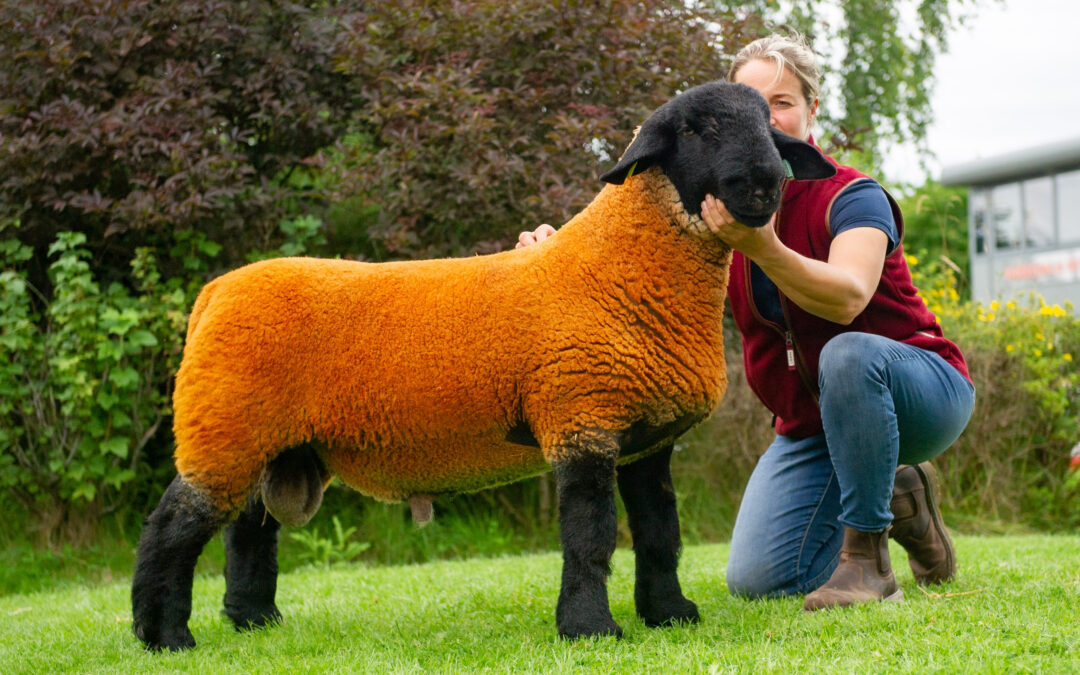 The Carlisle and Northern Counties Suffolk Show and Sale held at Carlisle on Friday saw a top price of 10,000gns achieved by Jimmy Douglas for his Reserve Male Champion Cairness 33H:19:03129. This lamb was sired by Millhouse Remarkable and out of a homebred dam sired by Cavanagrove Catalyst. He was purchased in a half share by Messrs Holmes from Broadway Worcestershire and Messrs Samuel from Hereford. Click here to view top price pedigree

The Male and Overall Championship was won by Andrew Hambleton’s Dovedale STZ:19:13667, a ram lamb sired by 2018 sire of the year Strathbogie A Kind of Magic and out of a Strathbogie bred dam who was purchased from the flock privately. The successful bidder for this lamb was Messrs Irwin from Umberleigh, Devon.

Andrew Hambleton had a successfully day as he also sold a full ET brother to the aforementioned for 1100gns. This ram lamb STZ:19:13668 was purchased by Messrs Redmayne from Southwaite, Carlisle.

The 3rd prize winning lamb from SJ Buckley’s Sitlow flock sold for 3800gns to Messrs Beattie from Omagh, Northern Ireland. This lamb 45Z:19:03637 was sired by Strathbogie Peaky Blinder and out of a Sitlow dam sired by Haddo High Voltage.

The Sitlow flock also sold another lamb, 45Z:19:03625, for 1200gns. This one was sired by Salopian He’s The Boy and out of another homebred ewe this time by Islandmoyle Empire.

At 1800gns was another ram lamb to be purchased in a half share this time by Messrs Midgley from York and Messrs Richmond from Preston. The lamb in question was consigned by GI Richmond’s Sullom flock, FPT:19:00127 and has won his class the Great Yorkshire Show. He was sired by Strathisla Schumacher and out of a homebred Muirton One Direction daughter.

Lilia Hutchinson sold a ram lamb from her Howgillfoot flock for 1400gns. This was UTZ:19:00006, a son of Birness Buckshot and out of a Lakeview bred ewe. This lamb was purchased over the phone by Messrs Williams from Gwynedd.

Myfyr Evans’ Rhaeadr flock sold to a top of 1100gns for a substitute entry A12:19:02137 sired by Stockton Sniper’s Son and out of a homebred dam by Rookery Royal Escort. The successful bidder on this occasion was Messrs Jenkinson from Penrith.

The final ram to reach the 1000gns mark was another substitute entry this time form G and FJ Soulsby of the Williamsgill flock. This lamb FAJ:19:00687, was sired by Strathbogie Invictus and out of a homebred ewe by Strathisla HRH.

The females topped at 1000gns for the first animal into the ring, the Female Champion and Reserve Overall Champion from David Gilmour. This gimmer Broomknowes V18:18:02556 was sired by Landale Rocket and had won Champion at Dalrymple show this year. She was purchased by the judge of the pre-sale show Tom Fizsimon from Dumfries.